A futuristic vessel designed for oceanic research, the EARTH 300 is emission-free and powered by nuclear energy 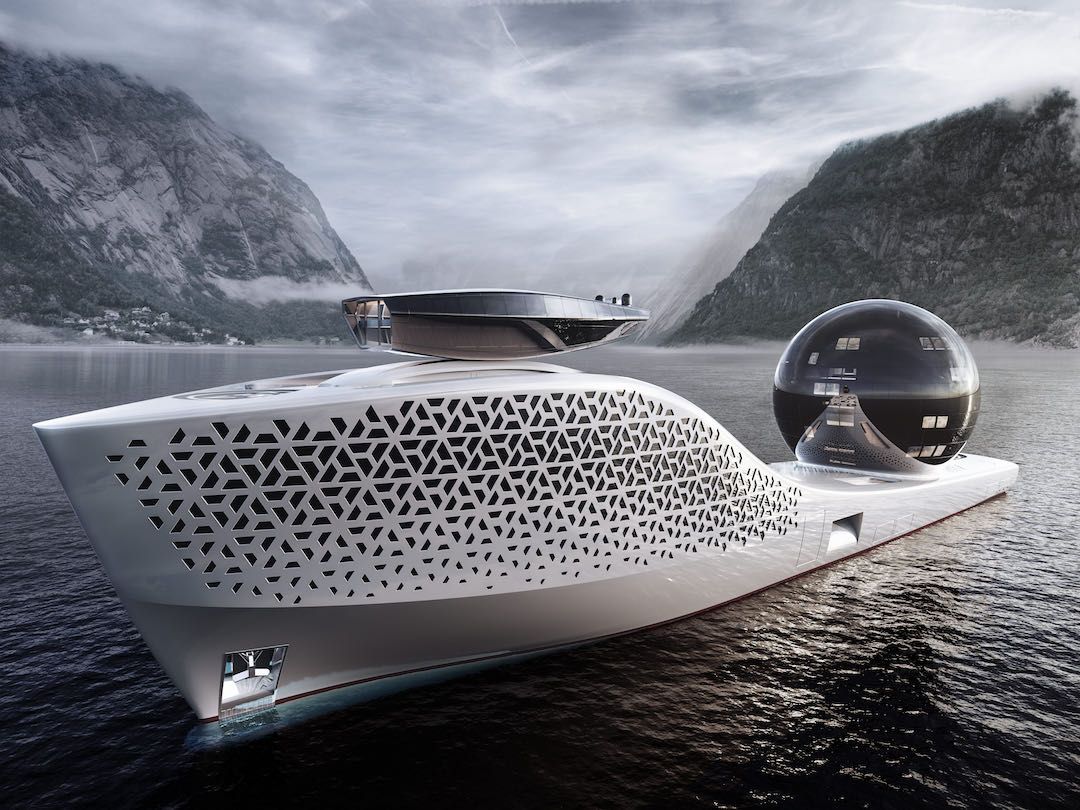 A “science city” on board an explorer vessel is big enough to accommodate 160 scientists and 22 state-of-the-art laboratories. Set for launch in 2025, the EARTH 300 boasts 984 feet in length and will be packed full of green technology with the intent to study climate change and hopefully come up with some solutions.

Designed for the future
International firm Iddes Yachts is behind the design of the ship, led by naval architect Iván Salas Jefferson. Suitably futuristic, the bold new concept features a contemporary shape with a pared-down conceptual language and an aerodynamic form.
Polish naval architecture firm NED worked alongside Iddes Yachts in finessing Earth 300’s otherworldly design, which is perforated with a pattern of geometric shapes extending towards the nose of the ship.
The vessel’s most striking feature, however, is its “science sphere”, chosen to resemble Earth, and poetically the focal area in which scientists will work hard to save it. It contains a 13-storey “science city” bringing together some of the world’s leading climate scientists, who together will collaborate on new climate solutions with the help of the ship’s state-of-the-art technology.

Other features include an observation deck that appears delicately balanced on the ship’s top, a 46-metre beam and a helicopter pad. The vessel will also carry a selection of advanced underwater vehicles for underwater expeditions.
“The ship will introduce features found on cruise, expedition, research and luxury yachts but she will be none of them,” explains Earth 300 chief executive Aaron Olivera.

A first of many firsts
Powered by atomic energy, the zero-emission superyacht steals power from an onboard molten-salt reactor based on technology created by TerraPower, the nuclear innovations company set up by Bill gates.
It’s a first as quantum computing and a molten salt reactor have never been installed on a ship before. Essentially, the ship will be built as a floating computer, costing a staggering £350-500 million to build.
EARTH 300 spans a sizable 984 feet, making it bigger than the Titanic and nearing the four-figures some of the largest ships in the world possess. Most of this will be taken up with scientific equipment that a fleet of climate scientists will use to capture real-time data.

A combination of built-in sensors, artificial intelligence, robotics, machine learning and real-time data processing will make sense of the data, as well as the world’s first commercial, ocean-going quantum computer. All the information gathered will be open-source and shared with other climate scientists as part of its mission to “unites both science and exploration to take on some of the biggest challenges on Earth.”
“To face the epic challenge posed by climate change, Earth 300 will combine science, technology, adventure, exploration, education and entertainment like it was never done before,” says Giulio Ceppi, head of systems design at EARTH 300.
“Citizen science” will be our key for a better future: we want to create the most innovative and effective tool to plan collectively for the survival of the oceans and the planet.”

The Future of EARTH 300
According to the EARTH 300 official website, the plan is for the ship to set sail in 2025, catering for up to 160 scientists from a variety of disciplines at any one time. Also on board will be 20 students, 165 crew members, and 40 VIP guests who will pay $3 million for their tickets.
Led by chief executive Olivera, the Earth 300 project is supported by a number of partners including IBM, Triton Submarines, EYOS Expeditions and RINA, which is among the world-leading classification societies in the cruise ships sector.
With the preliminary vessel design and naval engineering now complete, we now need only wait for Earth 300’s projected launch date of 2025.